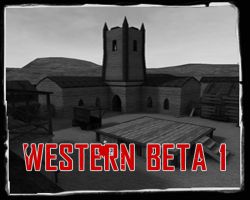 Story: Sheriff has put some Sabio Gang members in Jail after a long night of committing hostile deeds. The Gang in dark coats is up to free their Fellows.
If you decide your Fellows deserve their nights in Jail you can find multiple other ways to entertain yourself in the lovely Western town of Pegaso Pass.

Axis:
1] Destroy the Gunsmith’s door
2] Steal two packs of Dynamite
3] Steal a Detonator
4] Prepare the Detonator!
5] Activate and defend the Detonator for 30 seconds!

Note:
There are also many scripted mini games, trickjumps and other things to explore and to practise the most important skills while waiting for friends to join! Once they join you will have even more fun fragging or grabbing the objectives.