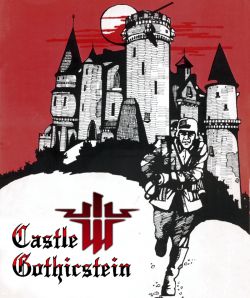 The Third Reich we know never existed. In 1936 Adolf Hitler faced huge riot in his country. Germany was divided into two parts: Nazis and Teutons. After two years of civil war Teutonic Legions led by Erhard Schreck managed to reach union with nazi Germany…
hide detail – Castle Gothicstein is the updated version of vanilla Castle Gothicstein. This is the hardcore trip into the dark sence of alternative world war 2. Prepare to the biggest challenge sinse your first play of RtCW.

Important:
This is the not final version, later we planned to add more stuff to this. Please don’t use any other texture mod mixing with that. If you have the texture bug (it’s not non-colored for example), you may use the WinRAR program to open the zzzz_gothic.pk3 file and search for needed texture. When you found it, make .tga copy of texture and put copy to same folder. If do everything right, all will be okay. We really sorry with artefacts in escape1 and escape2 levels. But this is only one way to make right lighting. Perhaps we’ll make fixed versions of this levels compiled in Q3map. We hope on your feedback and let us know if something wrong.