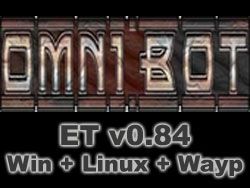 Omni-Bot 0.84 for Enemy Territory has been released.

We are pleased to announce new version of Omni-Bot for ET. The most important change is that goal_save command does not save all goal properties. The benefit is smaller file size and faster initialization. The drawback is that new goals gm files cannot be opened by previous Omni-Bot versions. If you want to use the latest waypoints, you must update to 0.84. If you use NoQuarter 1.2.7, you should update too, because 0.71 interface is included in Omni-Bot 0.84.

There are also new features in the omnibot mod:
Spectator can edit waypoints and can see all players on the map.
Rendering is more reliable and uses less resources because it does not need the boost interprocess library anymore.
New cvar cg_obituary can disable “killing” messages in the console, so that important messages will not scroll out of the window.
Warm-up time can be set to 1 second. You don’t have to wait 10 seconds anymore.