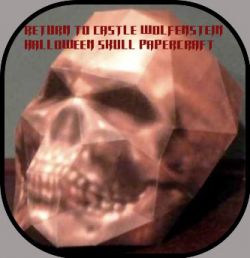 This halloween papercraft is a Wolfenstein Skull, created by Tektonten. “This skull is based on a 3D model from the World War II themed video game, Return to Castle Wolfenstein.”

In the game, skulls like this can be found (among other places) in secret rooms inside Nazi strongholds. As with the other skulls in the series, this one is roughly 1:1 scale.