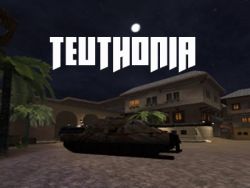 Teuthis release his new ET map Teuthonia – Quote: I am mapping for ET because I enjoy mapping, irrespective of whether the map is finally released or not. Reason I released this one and not others is because I believe that people will specifically like this one. If you are familiar with ET you will recognize some similarities to goldrush. This is on purpose because I personally think goldrush is by far the best custom map and I wanted to create something that has kinda similar gameplay and texturing so that people who like goldrush will likely also enjoy playing this one. Also the goldrush.map file is open source and its legal to use brush and script work from this map (what a great coincidence YEAH!).

Story, well if you know goldrush you know what’s coming now:
– The Allies have to steal a tank and steal some gold bars
– Escord the tank, clear the tank barriers and blow up the bank door
– Steal the gold bars and bring them to a nearby truck
– Escord the truck with the gold to the home base
– The Axis have to prevent the Allies to steal and secure the gold.