Return to Return to Castle Wolfenstein (1.0) 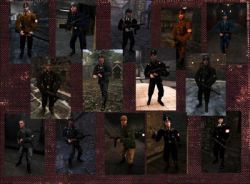 Description:
While waiting for the latest instalment of Wolfenstein, why not return to Return to Castle Wolfenstein with all new skins found only in the RtRtCW mod?
These uniforms are as historically accurate as possible according to Osprey Publishing’s military history books amd feature units from the heer, kriegsmarine, luftwaffe police, Afrika Corps and SS. This mod also occasionally draws on NPC designs in Wolfenstein 3D to maintain the spirit of that groundbreaking game.
This skins are alterations of the original designs in Return to Castle Wolfenstein.

Mission 3: Weapons of Vengeance (Forest Compound, Rocket Base, Radar Installation, Air Base Assault) Soldiers and officers patrolling the forest installation belong exclusively to regular army. Afrika Korps guard the rocket facility itself (for variety's sake — maybe they've been assigned to guarding the biological compounds found in north Africa?). The Radar installation now under the control of the Reich Security Main Office so expect to see RSHA staff and Gestapo officers under the command of SS Oberfuhrers. Officers and soldiers of the Luftwaffe police (inspired by blue Wolfenstein 3D SS) now keep watch over the air base.

Mission 6: Return Engagement (Bramburg Dam, Paderborn Village, Chateau Schufstaffel, Unhallowed Ground) Orpo squads and Deathshead's personal squad of SS paratroopers in Fallschirmjager camo block the way through the dam to Paderborn village. Be careful not to attract the attention the dreaded “Leibstandarte SS Adolf Hitler” in your mission to assassinate the Ahnenerbe Gruppenfuhrers, and dont forget to take out a high-value decoy on your way through (twin-gattling guns not supplied).

Mission 7: Operation Resurrection (The Dig, Return to Castle Wolfenstein, Heinrich) Soldiers and officers wear Waffen-SS smocks at dig site. Inside the castle under seige, the Fallschirmjager under Deathshead's command look even worse for wear (oblivious to pain thanks to his experiments). Final cutscene has a more accurate rendering of Himmler, in this case wearing his summer tunic (inspired by white Wolfenstein 3D officers).

Other: As many NPCs as possible have had their faces rendered differently for the sake of variety.
INSTALLATION: Place the PK3 file “rtrtcw” in Return to Castle Wolfenstein's “Main” folder. To uninstall delete PK3 file “rtrtcw”.