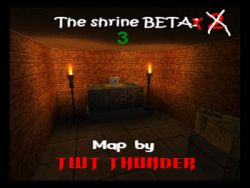 ~~~The Storyline~~~
Allied command has intercepted some secret radio transmissions sent between Axis forces, where there has been talk of an ancient Egyptian shrine which is located deep inside a pyramid. This ancient artifact is said to possess great powers, so the Allied forces hurry to try and to defend the pyramid in order to make the shrine safe. Unfortunately for the Allies, an Axis attack force is already closing in on them.

Thunder: “I will not continue more on this map as I felt I have done what I can with it.
Will release source shortly if someone feel for taking it to a final version.”