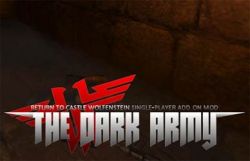 Story: One of the O.S.A. spies reports that Wilhelm Strasse develops a new type of Uber Soldat. Blazkowicz is send to finish him once and for all. Following recent information, he is in a secret research center, in German mountains.

The Dark Army is a Single-Player Add-On Mod for the original Return to Castle Wolfenstein on PC (Windows, Mac and Linux) coming Q4 2014.

New pictures of The Dark Army mod for Return to Castle Wolfenstein appeared (about 30 pictures in high-definition), giving you a look on the impressive results of my recent work on the maps, in order to update these to their final version.